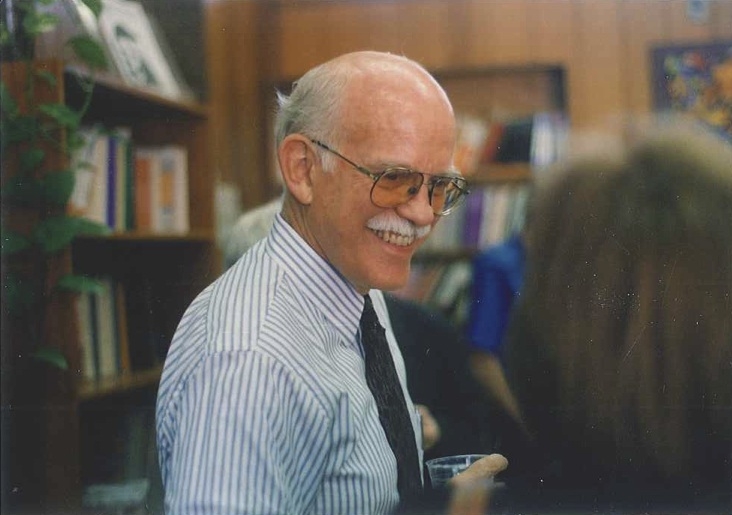 It is with great sorrow that the Department of Philosophy and the Columbian College of Arts and Sciences report the passing of our revered colleague William B. Griffith, Elton Professor of Philosophy and Public Policy. He died at midnight on February 10, 2014. Bill was completing a courageous recovery from torn patella ligaments, an injury that occurred in 2012, when he fell this past January and sustained trauma to the brain.

Bill earned his PhD in philosophy from Yale University in 1963 and, after service in the US Army, began his career at GW in July of 1964. His research interests and publications focused on the application of theories of distributive justice to environmental policy, welfare policy, tax policy, and the regulation of business. Bill served several terms as chair of the Department of Philosophy and was one of the longest-serving members of the Faculty Senate, where he occupied several different leadership positions, including chair of the Executive Committee, and chair of the Committee on Fiscal Planning and Budgeting. He also served as the redoubtable parliamentarian for Columbian College faculty meetings through the fall of 2013.

The recipient of the Trachtenberg Award for Service in 1993, Bill gave himself completely to the Department, the College, and the University he loved and served so faithfully. It was under Bill’s tenure that the Department of Philosophy first attained its current level of excellence. Long an advocate of philosophy in the public interest, he was the principal architect and long-serving director of the MA Program in Philosophy and Public Policy, the first of its kind in the United States.

Together with his wife, Patricia Griffith, the novelist, playwright, and English professor at GW, Bill was a supporter and patron of the arts and deeply enjoyed film, literature, the theatre and sculpture. Renowned and much loved for his wise counsel, calm and even keel, gentlemanly manner, and unfailing wit, Bill was continually sought out by students, colleagues, and administrators for mentoring and advice. Bill Griffith will be remembered by legions of students for his kind but firm guidance, his wide-ranging knowledge, and high standards. He will be sorely missed by the entire GW community.

The GW Department of Philosophy compiled this book of remembrances from the many people whose lives Bill impacted for the better, including former students, colleagues, friends, and beloved family members. Read the tribute book for Bill Griffith (PDF).

The Goutman Lecture was renamed the Griffith Lecture in honor of Dr. Bill Griffith, at the request of his former student and generous benefactor, Thomas M. Goutman.